Thanks for coming! To get the most out of what’s posted here and what will be, I hope you’ll have read two things. First: 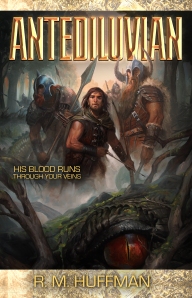 You can buy a Kindle edition here.

Print version here. (The trees are already dead, so don’t feel bad. Think of it as making sure their sacrifice isn’t wasted.)

Second, I suggest you read the first part of the book of Genesis, up to chapter 6, verse 4. If you don’t have a Bible handy, an online search will lead you to the text.

A quarter of human history occurred before the Great Flood, and details about that annihilated world are, unsurprisingly, scarce. What I’ve attempted to do with Antediluvian is to expand that world in a realistic way, taking clues from the Biblical account and adding known natural history and possible technology from cultures that were likely comparable, with a little mythology and speculation within the bounds of reason thrown in.

Also, by signing up for the Antediluvian mailing list, you’ll get emails when (and only when) there’s a new release or free swag, including paperback copies of the book, original artwork, and cover art prints.

Consider this site a portal into a world built on an existing foundation. Let me know what you’d like to see here, and thanks again for reading!

10 thoughts on “Welcome to ANTEDILUVIAN”